Sensing Others Energy, Even Trees!

“Do you have the patience to wait until your mud settles and the water is clear?” – Lao Tzu

This is quite the topic—one that’s taken me by complete surprise over the years.

I had heard of people who could sense energies, but did not believe it until I had it demonstrated to me by Alain Herriott, creator of The Wonder Method.

Not only that—but he could teach it as well.

The practice part was far from a shock. Everything started off being so subtle that whatever I felt—I had to wonder if I was simply making it up.

Over time, it wasn’t quite as subtle anymore. Slowly but surely my sensitivity increased.

“Super cool!” I figured. But am I still just doing make-believe with myself?

If this was really working—then certainly what I sensed would be sensed similarly by others too—right?

If I could sense that someone had a massive knot in their chest, but the next person would say “oh what a free and beautiful flow of energies!”—then of what use would this sensing be?

Would I even be sensing anything? Or just be appealing to my own fantasy at that point?

Unfortunately, I’m not at liberty to teach the methods of sensing, yet.

If you’re still interested in getting started—developing good sensitivity within your self is a great start.

To my big surprise though—I’ve found that others who has practiced sensing others energy will have the very same experience as me.

Having had this confirmed over and over is hardly scientific—but it is mind-blowing.

Let’s briefly discuss the elephant in the room…

Whether you believe that energy exists or not—it has NOT presently been confirmed scientifically.

While science is not a belief (though some use it to underscore their beliefs), it’s a dynamic tool for investigations.

In the future we may or may not find scientifically validated proof for its existence.

In the meantime—check out these 16 Studies That Proves Energy Healing Works.

While discussing the exact theories of how and/or why sensing others energy works is outside the scope of the article—let’s look at some common beliefs and sources for further study for those of you who find this fascinating.

While this sounds reasonable at first, we need to first look at its implications.

A universal emotion would be for example, sadness, happiness, joy, disappointment etc.

Lisa Feldman in her book How Emotions Are Made (affiliate) suggests that the theory of universal emotions are based on flawed studies where certain emotions have always been suggested as options.

For example, what does this expression represent? 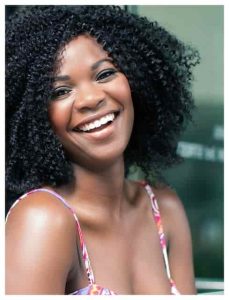 Which one would you pick?

It’s reasonable to pick A, right?

Most people did, and that’s how smiles came to be associated with happiness, even when tested on tribes in faraway places of the world—who had no contact with other civilizations and our norms.

The problem is—when you remove the options of A, B, C, the results are heavily affected.

Suddenly, no one calls a smile happiness in these tribes—since they haven’t been taught the concept of smiles signifying happiness.

Rather than universal emotions, Lisa Feldman suggests that we are the architects of our own emotions.

This would suggest that there’s certainly more to energy sensing than simple cold reading. Especially when done to animals, plants etc.

2. How do you know that energy sensing isn’t just your own imagination?

That’s why you find someone or multiple people to practice with. Try sensing objects and people, write down your experiences and then compare.

If you always end up at 90-100% accuracy—you can probably start lending some sort of trust to your sensing.

3. How can you sense something that’s outside of yourself? That’s impossible.

While this topic is MASSIVE, let’s touch on it briefly.

Chances are, there’s no “out there”, out there.

Niels Bohr, regarded as one of the founding fathers to the quantum theory—noticed that at the sub-atomic level, our general Newtonian laws of physics no longer apply.

He made made many major discoveries, but for this topic specifically—these 2 are of big interest:

This may have us reconsider our question of there being any “out there”, if we may in fact be the creators of our own reality.

The Double-slit Experiment would certainly suggest so.

For further discussions on this topic, I recommend listening to interviews with Niels Bohr (there’s plenty on youtube).

David Bohm also has some interesting points on these topics (he’s on YouTube as well, his book Wholeness And the Implicate Order [affiliate] is a heavy but very interesting read too).